Don’t you just love Cliff Richard’s song? I sing along as I pack, my heart bursting with joy. ‘No more worries for a week or two.’ Trying to decide what to pack into the carry-on suitcase I build a mountain of clothes Kondo style.

Orange sundress, but which shoes match it; the two-tone orange and green ones, the cream ones (boring), or the zany patterned ones. I pack them all. Putrid pink dress with the purple spots. I hate it, but it was cheap in the sale, and I could wear it on the beach. 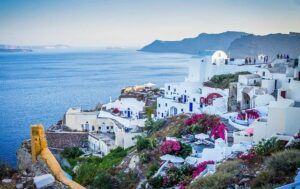 I chew my thumbnail as I peruse the diminishing mountain of clothes on the bed. It’s more of a small hill now, but something glittery catches my eye.

I tug it out. It’s my absolute favourite holiday piece, an off the shoulder (more like off the planet) bright yellow top with huge sequins and so many frills it could fly on its own.

It’s the iconic holiday wear. It’s the one I always pack, but never wear. It’s the top I know I’ll definitely wear this year. (I say that every year!). The final items are stabbed viciously down the sides of the suitcase and into the outside pockets.

Twenty pairs of knickers, ten bras, a huge pair of black Spanx to hold in my enthusiasm, and four handbags. I shove and push and curse the overflowing case.

Finally, I close it, well almost. The zip is straining. I sit on top of the suitcase and bounce up and down. Great for the glutes. Ah, sugar lumps! (Note to self: stop using this phrase as it’s a New Zealand euphemism for testicles). Aw, shucks! I forgot to pack the sun cream and toiletries. I open the suitcase just a fraction and try and squeeze in the bottles and jars and tubes. It’s not my day. The suitcase refuses point blank to eat any more stuff. I have a brainwave.

I take all the bottles and jars and tubes into the kitchen and I empty them all into those amazing Ziploc bags. Perfect! They squish beautifully into the suitcase. A final bounce and zip, and hurrah! I’m so happy I dance around the room singing along with Cliff Richard. ‘We’re going where the sun shines brightest.’ Something is bugging me. What did I forget? Ah! Sweaters. Although I’m going to Arizona and the June temperature rarely drops below a sizzling 104F, you never know. There might be freak weather. It could get cold. Global warming and all that, so a girl must always be prepared. I shove two chunky sweaters into my oversized handbag. It’s so oversized you could fit a Great Dane into it, the canine variety, not a gorgeous Danish hunk. Now there’s a thought. Could I sneak one of them in? No way am I paying his fare.

‘Stop hallucinating and finish packing.’ Who said that? I’m losing the plot, literally and literary. Something’s still bugging me. I stare at the bulging suitcase mentally listing everything I packed. Something’s not right. What did I forget? AAAAH!! I forgot to label the Ziploc bags. It will be potluck or rather bag-luck. Wash with sun cream. Moisturize with shampoo. Brush my teeth with eyelash glue. You get the picture! Sod it. I’m beyond caring. One last sing-along with Cliff Richard. Oh, didn’t I say. He came around to help me pack. Such a gentleman.  I take that back. He lounged on my couch (he does that so elegantly), chatting on the phone to his new BFF, Marie Kondo, totally disrespectful of my packing ability. I forgive you, Sir Cliff, if you promise to sing a duet with me. And we belt out the final verse.

Everybody has a summer holiday

Doin’ things they always wanted to

So we’re going on a summer holiday,

To make our dreams come true

For me and you,

For me and you.

Time to hit the road, Cliff. 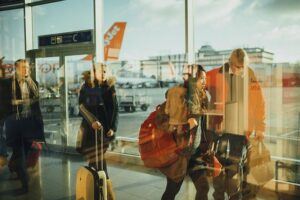 Four more hours and I’ll be onboard. I wonder if they’ll upgrade me. I throw back the final dregs of Americano. It’s my fourth one since I arrived. I’m all a quiver. What possessed me to arrive so early? I mentally list all I must do before boarding.

Eat a chocolate muffin. Actually, make that two. Need the sugar rush. Buy food for the flight. The food onboard is inedible. Hide a few large tins of coca cola on person (‘for moi’ as Miss Piggy says.)

Inflight drinks are too expensive and the freebies few and far between. Don’t even get that cute miniature toothpaste anymore, or the vile socks, but everyone brought them home anyway.

My best wishes all beautifully packed are now fair game for the gimlet-eyed security. Barefoot (forgot my socks), trying not to wince at the weight, I hoist all my attributes (my handbag is definitely an inherent part of me), onto the conveyor belt. It screeches to a halt. Everyone’s head swivelled and I mean everyone. They all stare at me balefully. I know what they’re thinking. ‘She’s going to hold up the queue.’ Security rush towards me leaving all the other conveyer belts unstaffed. Bored children scream with delight and push each other as they climb on the empty conveyor belts. At least I made someone happy. Questions are fired at me, staccato commands and far too much spit. Get out of my face, guys, I think, but dare not utter. I stand to attention as best I can, well, a bit lop-sided with a ten-ton bag which is cutting into my shoulder. I am sweating under the capacious coat.

My suitcase, and tote bags are opened. Ten pairs of hands rummage through the mountain of stuff. Ten pairs of eyes stare at me. Questions fly at me like tennis balls at Wimbledon.

‘Did you pack this yourself?’ I meekly reply, ‘Yes.’ They stare at each other in horror. I hear a whisper. ‘She didn’t get Marie Kondo to help.’ One of them holds up my jeans. He’s frowning. ‘These are not Gucci. Not even Armani.’ He flings them into a bin. More hands hold up my dresses and t-shirts and spangly tops and shoes. At this point even the passengers are helping. I’m shrivelling under outcries of horror and spitting-scathing words. Huge exclamation marks attack me.

‘Not allowed into the country! It’s vile! Who buys stuff like this?! Made in Cheap Land! Synthetic! OMG! This isn’t Valentino! Where’s the Gucci stuff?! This handbag is so not in Vogue! That one is ok, it’s Prada. No, it’s not. It says Brada. Fake! Fake! Fake!’ My sensibilities were stung. My self-esteem, what little I had originally, was reduced to nada! The final fling. Someone shouted (with far too much glee), ‘look at these!’ My comfy pink knickers were held aloft. Everyone screamed – shock and horror etched on their sweaty faces. A child’s voice piped up. ‘Mummy, are they your knickers?’ The heat was off me as all eyes swivelled towards the yummy mummy with 2.5 kids in tow.

To cut a long story short or cut to the chase or disseminate, most of my clothing ended up in a bin, which was by now overflowing. Two Bergie’s from Cape Town crawled on the floor rummaging around in my stuff. Even they threw most of it aside in disgust. The tannoy burst into life. ‘Final call for flight number 171 to Cape Town. Will all Bergie’s go to the boarding gate now.’ Suddenly hundreds (I kid not) of Bergie’s broke into a song and dance routine flinging the rest of my clothes into the air. ‘Mama Mia,’ I shouted. ‘Gimme! Gimmee! Gimmee back my stuff.’ One of them was wearing my spangly-sequined top. I ran after him. ‘You’re a Dancing Queen. Gimmee! Gimmee! Gimmee!’ ‘The Winner Takes It All’, he replied. ‘Besides, I’m no bloody queen. I’m Fernando.’

I board my flight to Arizona carrying an extremely light suitcase. I have one pair of knickers, one t-shirt and a pair of shorts. My Ziploc bags of creams and lotions were eaten by the airport sniffer dogs who are foaming at the mouth. Not rabies ‘foaming’ more of a shampoo overload. On a positive note, they won’t get sunburnt. And I have an excuse to go shopping. Scottsdale Fashion Square here I come!