TO CONFUSE OR NOT TO CONFUSE, THAT IS THE QUESTION.

A LESSON IN ENGLISH

Did you know that Homonyms are words that sound alike, but have different meanings? They are also spelt differently. However, just to confuse you further, if the words are spelled the same, but still have different meanings they are called Homographs. That’s the boring bit done. Now down to brass tacks and the nitty gritty. Stop scratching your head. I won’t explain brass tacks or nitty gritty to you. That’s a future blog. (Will be referred to as FuBlo) So please email me with any suggestions for FuBlos.

Air is the invisible stuff you suck in to keep you alive, assuming it’s not pollution loaded. Or you think you’re so special but are really full of c…That’s known as having an air of superiority. Air can also mean an empty space, so beware. There’s no connection to your superior air. Just proves you are empty-headed and know nada, or maybe the air of superiority is a cover for shyness or lack of confidence. So baby, carry on and strut your stuff. Fake it till you make it.

Heir sounds exactly like air. I know it’s not spelt the same (duh!). The H is silent. Confused? Don’t blame you. Heir means you got something from someone for nothing. You didn’t earn it, well maybe you did. All that kow-towing and sucking-up must have been exhausting, especially if the old goat, your Uncle Huxley (no relation to Adolf) lived till the ripe old age of 99, so ripe he stank!

Let’s not forget Aunt Hedwige. You visited her every week. Walked her ten smelly poodles. That alone deserves an inheritance. Took her out for afternoon tea to Harrods and Fortnum and Mason’s which wasn’t cheap. You were at her beck and call for over 40 years. You invested all your salary and life in her, knowing you were her Heir Presumptive. Right? You assumed she would leave all her wealth to you. Ever hear the saying ‘Assume makes an ASS of yoU and Me? In this scenario you are the ASS!

Your sister, Heidi, (No! Not the Swiss one who chased a goatherd called Peter), inherited the whole shebang (FuBlo). She became an Heiress (also silent H). She became a lady (questionable in your eyes) of means, a fat cat, Ms Moneybags, and you were sick as a dog. You were so angry you killed the poodles which she’d also inherited. Then you had a plan. Suck up to your sister.

Kow-tow, be at her beck and call, sympathise with her when every single boyfriend dumps her. (Nothing whatsoever to do with the rumours YOU are spreading about her). Just generally be an absolute schmuck until she changes her will and names you as her Heir (not presumptive this time). Then, you talk discreetly to Harleen and Haurora Halloran. (Didn’t you read that blog?).

You hire Harleen and Haurora. They are in the contract-killing business (amongst other talents which may interest you). And as you are their first contract-killee (not misspelt) client they might give you a discount. They do offer 2 for 1, so have a think about that. Any other wealthy relatives in your family? On that note I must complain. How did you get so lucky? Not one, but two wealthy relatives. Not including your dear sister. I am so peed off about that. Some people have all the luck.

If you hang on a minute, I’ll give you a minute piece of cake.

Are you saying I’m fat? My partner says my curves entrance him and he says I make a grand entrance every time I come into a room. So there!

Sorry. I misheard. I’m as deaf as a bat.

You’ll be a lot deafer when I whack you across your dumbo ears with a bat.

Don’t be so evil. You know I’m scared of bats.

Not that kind of bat, you fool. A cricket bat.

Let’s not have a row. It upsets me. I hope you booked the evening show for the cinema. What row are we sitting in? Don’t forget to wear your spanx for evening out your spare tyre.

You wound me deeply. My feelings are hurt.

Well, you shouldn’t have wound me up!

Well, I learned everything I know at my granny’s knee, including how to stuff pillows with duck down.

You make me feel so down with your hey-ho positivity.

Last week you moped for days. Are you ever happy?

You are so bloody cutting. Just hop on your moped and ride off into the sunset or try the cliff road. You might get sucked under a wave.

I love you, girlfriend.

They wave at each other. 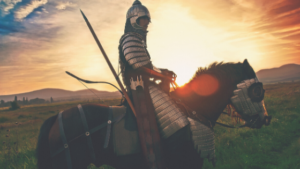 It was a dark night, murky and grey. Suddenly the heavens opened. I gazed up in awe expecting a hoard of angels to come to my rescue, or at least bring me a torch. As I said it was a dark night. But this is Ireland and it was lashing down with rain not angels. I trudged on knowing I would fall into a hole. Well, I’m Posneg. Positive I’ll find a hole, or it will find me, and negative because I know I’ll fall into it. It was my lucky night.

Suddenly out of nowhere, or maybe it was Oughterard, a knight bore down on me in all his splendour. He was riding a white horse. I was going to say charger but thought I might confuse myself and everyone else. He parked his horse (well I don’t know what you do with them) and he slid off the huge beast. He undid the knot of his cape and flung it around me. I did not know what to say or do. Then he spoke. His voice was a deep bass, so alluring. He was carrying a huge fishing rod and his bag was bulging, two dead eyes staring at me.

‘Yes, my beauty. It’s a sea bass. Legend says it’s an aphrodisiac and that the person who eats it only ever sees beauty. ‘Maiden,’ he said. (that’s me.) ‘I’m not an idle man. As you can see, I’ve been fishing. I also rescue fair maidens as I travel the land looking for my soul mate, the love of my life. Now I was delighted to be called a maiden, a fair one at that, but could I be his soul mate? Did the universe have a plan for me? A knight no less. Was he my idol?

‘I fear I’m blind,’ he said ‘and I don’t hear very well. Please tell me your name, fair maiden.’ He mooched around looking for me. ‘Where are you?’

A flash of lightening lit up the sky showing the knight errant. He was seriously lacking in the beauty stakes.

‘I’m here,’ I said. ‘But ‘tis not a cougar you want, my knight. Nor do I want an ugly, blind, deaf old coot. And I would surely need to eat ten thousand bass before I see you as beautiful. I know that’s base of me, but hey ho that’s how I go.’

I hopped on his horse and cantered off into the night and left the knight to hang out and dry, assuming it stopped raining. I heard later that he was reigning over the kingdom of Homophones.