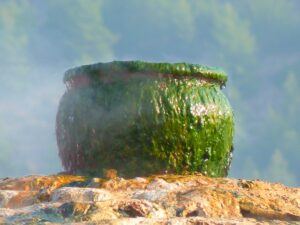 THE SCRIPT (Keeping it simple for the cast).

Teresa May: The withdrawal agreement was my baby.

Boris: But we need a transition period, babe.

Teresa: Did you just call me Babe? Off with his head!

Nigel: No, you fool. The thingymebob. The gizmo. The Brex something. Or is it

Dominic: Becks! When did Victoria and David get involved?

Jeremy: Vicky is designing all our outfits for our withdrawal from Europe and

David is providing the balls as we don’t have any.

Matthew: (in a sad voice) Nobody likes me anymore. I want my mummy. Then he perks up and says: There is guarded optimism. Any kind of optimism is good.

Will to producer: Oy! How come that Matthew fella has more lines than me? Not fair, he whines.

Michael: No deal without my seal and Operation Yellowhammer is on standby.

Ronald: Mikey, you do know that the Yellowhammer has a song which sounds like: A little bit of bread and no cheese. Are you predicting a recession?

Michael: ‘Go, prick thy face, and over-red thy fear. Thou lily-liver’d boy.’

That’s from Macbeth, in case you didn’t know.

Daniel: Never heard of the man. MacBeth? What constituency is he in?

The complete cast turn to the camera and utter:

‘As it Teeters on the Brink, will there be a Cliffhanger Brexit Finish? No-deal scenario?’

The screen fades to black. The orchestra play Mahler’s ‘Ich bin der Welt abhaden gekommen.’ (‘I’ve become lost to the world’). A hiss is heard from one of the cast. ‘Thought we were supposed to sing Sinatra’s ‘My Way.’

WHAT HAVE ALL THESE WORDS IN COMMON?

When you ask people what Brexit means, the reply is ‘WhataWhaty?’ Ask a posh person and the reply is: ‘Whawati.’ They speak Maori.

Noel Edwards is trumped (No. not Donald Trump. Yet) as new Prime Minister in the UK. He’s been presenting Deal or No Deal for 11 years, so is well brexed. The show’s banker will also relocate to Downing street, replacing the current *anker. (I mean anchor.)

Domino’s is stockpiling 7 million pounds worth of pizza toppings. If you get the correct answer to the question below you too can win 23,000 Vietnamese Dong. 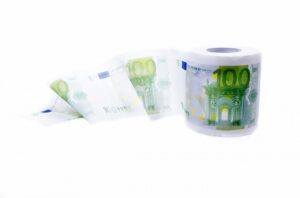 German-owned WEPA (aptly named) has stockpiled about 3.5 million rolls of toilet paper in UK warehouses. No shit. Pardon the pun. Britons have stocked up on painkillers and toilet paper. Such is the pain caused by Brexit as the shit hits the fan! Preferably hits the toilet pan.

Welsh government is stockpiling body bags and trampolines. My source informed me that The Spice Girls have re-released ‘It’s Raining Men!

Hallelujah!’ They performed in Llandrindod, Wales, as a gift to the people.

With 4 women to every man in Llandrindod, times are tough. The Spice Girls amped up and sung their hearts out. The clouds cleared, the sun shone and tons of men hurtled to earth, most of them landing on the trampolines. A few, sadly, had to use the body bags. Some were injured, nothing serious. Just left with a limp or a squashed nose or a flatter face.

Today 10,000 men rained on Llandrindrod, in Wales. Women flocked from all over the UK and Ireland, but the Welsh women were canny. They had changed details on their Website and named Rother as the Raining Men Venue. No way were they letting any man into the grasps of English or Irish hands. They might consider giving them the dregs after the best ones have been culled.

Ho’oka ‘ala: Do the Hokey Pokey. That’s what it’s all about!

Fa’ail’oge: We are failing. We are ailing. Cross the waters across the sea. (Mass

Ubhululu: Lulu breaks the charts yet again with her new entry for the

Adobe: (New rap song). A do be is different from a Wanna-b. Don’t be a sap. Build your app.

(A Do Be is also a Brexit know-it-all. Not an ideal guest for dinner parties, unless your Brexit menu is so vile you need distraction from the food.)

I went shopping for my usual 5 a day fruit and veg, bread and milk. Handed a tenner to the cashier. She looked at me with such disdain my tongue shrivelled.

As my tongue had shrivelled I was speechless. Suddenly a Scottish Choir appeared singing with gusto. ‘You’ve been Brexitted. You will pay. You’ve been Br…..Ex It….Ted.’

‘Feck off, you eejits. You’re in the wrong country. This is Ireland and we are not Brexy anything and my name isn’t Ted.’

They handed me their sporrans and disappeared. Sporrans were empty. Wouldn’t you know it.

90% of our agricultural food exports are exported to Britain. Tariffs, certification, border checks, more admin costs and a host of other Brexitonian measures equals negative trading equals. Many exporters will not survive.

COST OF LIVING WILL INCREASE

Irish pension funds are worth more than 110 billion pounds. About a quarter has been invested in UK and EU stock market Already hammered in the last few weeks. Pensions could be well decimated to the Brexit tune of thousands.

Briton, Anthony Joshua, (with some Irish roots), was the heavy-weight world champion.

American born Mexican, Andy Ruiz is the new champion. Is this the beginning of the Brexit Effect? All things USA.

BREXIT the Big Bad Boy has kicked our ass. We are fired! 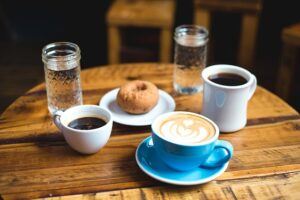 Me: I don’t want John the Baptist’s head on a plate. Just a latte.

Cashier Shouts to Chef: One Latte and Theresa May’s head on a plate.

Chef: Theresa May off the menu. She’s on Strictly Come Lancing with Donald Trump.

Cashier: Then one Latte with Boris Johnson’s head on a plate.

Chef: Only got headless chickens running around squawking. There’s a recession.

Me: One Latte, headache tablets, and the largest cream doughnut you have.

Me: Do you take Brexit IOU’s?

HAVE A BREXIT DAY!

Start your day with ReadyBrex!
If Brexit really gets you down take a break and spend a weekend in the Norfolk Brecks. Did you know that Breck means rough, sandy, undulating ground. No! Not 10 Downing St. The Norfolk Brecks.
If all else fails and your head is thumping from Brexit overload, just take a Brexidol tablet. Actually it’s an anti-inflammatory, but then so are the politicians words minus the anti.