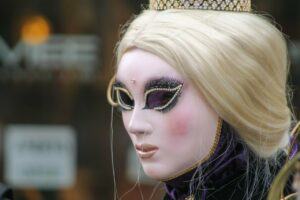 Once upon a time there lived a beautiful princess called, Snow White aka Sneewittchen. You gotta admit her name sounds a lot better in German. Her lips were black as ebony, her skin was red as a rose (too much sun), and her hair was white as snow with a black ridged parting. She ran out of dye.

She was a semi-goth, not quite a gothess! She lived with seven men of short stature. Shame on her. Well, Grumpy didn’t get any oats, I mean porridge, hence his grumpiness, gluten free not available. I’m surprised some busy body didn’t call Social Services to report this strange set-up. Yet, I have a sneaking admiration for our gothess. How many women could put up with seven men?

Like all good fairy tales, Sneewittchen’s mother died after giving birth to her and naturally her father remarried. Her nemesis was the evil Queen, her stepmother who apparently had nothing to do all day except stare in the mirror chanting: ‘Mirror, mirror on the wall. Who’s the fairest of them all?’ Of course, the mirror always replied that she was. She was obviously a great one for positivity and certainly didn’t suffer from low self-esteem.

It’s said that she killed her husband, Snow White’s father, but it can’t be proved, so our lovely Gothess became an orphan. That’s a Cold Case waiting to be opened. To cut to the chase, an unemployed/resting actor was the voice behind the mirror. He occasionally worked in Starbucks and on this particular day was suffering from a caffeine and sugar overload which made him feel very tetchy.

He was thoroughly fed up of repeating the same words hundreds of time every day, so he changed the script and with-it centuries of fairy tale history. The next time the evil Queen looked at him and uttered her mantra, he replied: ‘You, my queen, are fair; it is true. But Snow White is even fairer than you.’ She was a wee bit irritated so demanded Snow White aka Sneewittchen, be killed, as you do, but of course the kind huntsman, another out of work actor, released the young princess into the forest. 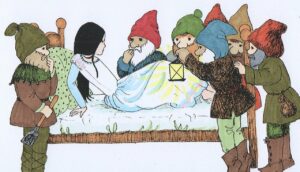 Sneewittchen is so p… off and swears she’ll get revenge. Luckily for all children reading this story she calms down when she finds a wee house to shelter in. Contrary to the tales written and told the house is a complete mess and she’s appalled at how dirty it is. ‘I bet this house belongs to seven short shysters.’

She was a wee bit psychic and of course she was right. The seven chairs, seven plates, seven pieces of bread, seven dinners, seven forks, seven cups, and seven beds were a clue. She ate and drank to her hearts content, tried out all the beds until she found one that didn’t stink as much, and she slept.

The seven vertically challenged men returned home and found the gothess asleep. They were extremely unhappy that someone had broken into their home and they quarrelled. Dopey,

thought they should call CSI Miami to solve the case. He was ahead of his time. Sleepy yawned and told him not to be daft, that the series had ended. He fell asleep and missed the rest of the story.

Sneezy sneezed and woke Sneewittchen up, a glob of snot landing on her cheek. ‘Was zum Teufel. What the hell,’ she grumbled. Happy laughed because he was always happy. Doc the leader of the group tried to speak but didn’t have the confidence. He really needs to attend my PosNeg workshop.

(Didn’t you read that blog!) Grumpy was really annoyed. ‘Why couldn’t a beautiful princess have broken into our home? It’s not like there isn’t a vast choice. Someone is dissing us. It’s not fair.’ And he stamped his foot so hard the bed shook and Snow White aka Sneewittchen tumbled out onto the floor.

She screamed. ‘This floor is filthy. You guys live like pigs. Actually, pigs are cleaner.’ She got up and glared at them. ‘Whoa, you whippersnapper,’ Happy uttered. He was no longer happy. ‘You broke into our home, treated it like a five-star hotel and you have the cheek to insult us!’ Doc found his voice.

(PosNeg workshop) and very firmly told her: ‘As a punishment you’ll stay and cook and clean and sew and knit and generally be our slave.’ Surprisingly she agreed. Well, not so surprising. She had nowhere else to go. And so, the tale of Sneewittchen aka Snow White got into the annals of fairy tale history.

Snow White aka Sneewittchen soon had the house in order thanks to her bestie, Cinders aka Cinderella. She was an expert in cleaning and did all the work while Snow White caught up with the gossip in OK magazine. She was a bit peeved when she saw a photo of Cinderella in a beautiful ball gown. She inhaled sharply on reading the article. ‘Cinders, you didn’t tell me you went to a ball and you’re on the wanted list of Princes.com.

One of them is looking for you.’ Cinders yawned. ‘Oh, that’s an old story. Been there. Done that.’ She carried on cleaning. Sneewittchen was amazed. ‘But he’s your way out of this dark forest, your path to riches. You can live in a beautiful palace.’ ‘Not interested,’ Cinders replied. ‘Been there. Done that.’ Full sentences were not her forte. ‘Well, I want a prince,’ Sneewittchen said. ‘Lend me your ball gown.’

‘No need,’ Cinders replied. ‘I’ll give you my glass slipper. The prince has the other one. I checked google earlier and it appears he’s nearby.’ She frowned as she looked at Sneewittchen’s feet. ‘Problemo! Your hooves big, sister.’ ‘Just give me the damn shoe,’ Sneewittchen snarled. She grabbed it and shoved her foot in wincing as it cracked and cut her big toe. ‘Quick, Cinders. Give me the glue.’ At that moment the fairy godmother appeared.

‘This is so not ok. What are you two playing at? You can’t mess around with fairy tales like this. ‘Whatever!’ Sneewittchen aka Snow White said. ‘Right I’m off to the woods to find my prince. Cinders looked at the fairy godmother. ‘Told you she was a b…. My ugly stepsisters are angels compared to her.’ The fairy godmother sat down by the fire. ‘I’m sick and tired of

all this palaver. I’m sick and tired of making your wishes come true and then you change your mind. I’m sick and tired of people repeating everything I say for years and years and years.’ Oh, stop moaning,’ Cinders said. ‘Your choice. Get a life!’ The fairy godmother looked at her protegee and smiled. ‘You’re right.’ She pulled her iPhone out and scrolled through the APPS. ‘I’m booked a few PosNeg sessions. That should do the trick.’ ‘Been there. Done that,’ Cinders muttered. 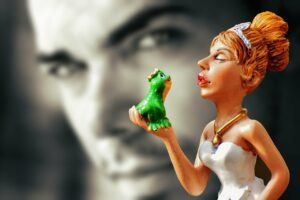 The prince had been wandering for hundreds of years and his feet were throbbing. His carriage hadn’t passed the MOT and he was decidedly grumpy. All his advisers and servants had scuppered, most of them working illegally in USA, having stolen fake passports from the prince’s safe.

Now that’s another story. Anyway, to cut a long story short, the prince spotted Sneewittchen aka Snow White in the distance. He was entranced. Being a goth himself he was so happy to have found his gothess that he threw the glass slipper away and ran to meet her, his sore feet now forgotten.

The power of positive thinking. She glided slowly, (as they do in the best movies) towards him. The birds sang. The sun shone. The trees burst into flower. And all was well in the kingdom for a few years. The glass slipper was found by Alice in Wonderland and she’s currently investing in a new shoe business with Puss in Cahoots.

Sneewittchen’s evil stepmother, the Queen, and Cinderella’s evil stepsisters downloaded the Tinder APP from forest.com. They were on the hunt and succeeded. They met and married Hal, Holden and Henry Halloran from The Halloran Dynasty. (they obviously didn’t read my blog).

They assumed the men were of royal lineage. Hal, Holden and Henry had been naughty. Their Tinder profile stated they were princes among men. Unfortunately, the evil Queen and Cinders stepsisters didn’t sign a pre-nup and the brothers soon tired of their slovenly ways, greed and constant nagging.

They divorced leaving the females penniless. But Fate and Karma came to their rescue. They got jobs as char ladies in Amazon, (The forest not amazon.com) and spent the rest of their days dusting leaves. Rumour has it that they’re still there. Sneewittchen aka Snow White married the newly divorced Henry Halloran.

She was now on her third marriage accumulating wealth with each pre-nup agreement she signed. No flies on this girly. Her BF Cinders married Hal Halloran and they all lived happily. Although all she accumulated was brooms. Some being vintage could get an airing on the Antiques Show.

THE MORAL OF THIS STORY IS

Don’t count your Princes before they’re hatched and always sign a pre-nup agreement.