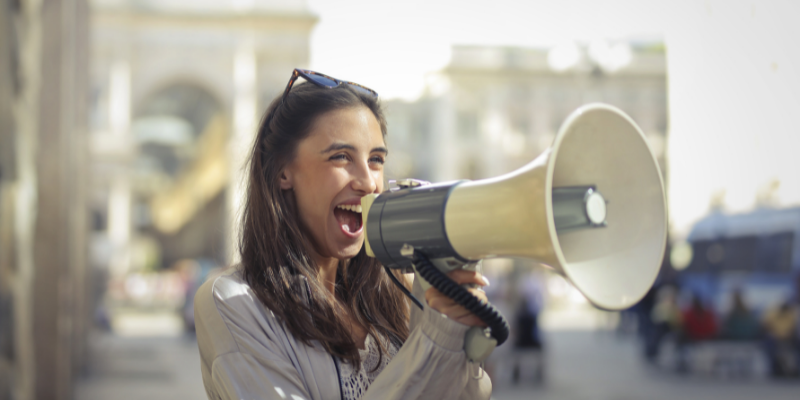 It’s not what you say – it’s how you say it! Add facial expressions and hear the unvarnished truth. For instance, how often does someone say – ‘mind yourself’. It may be caring or it may be a threat, so beware. And as you fall into the huge pothole, take a good look at the person who said it. If they look appalled you know they care, but if they’re smirking – well, there you have it.

One of my favourites is: ‘Don’t you have a mind of your own?’ Whose mind would I have if not my own? Although it would be great craic – (Irish word for having a good time) – if you could wander into other people’s minds. Saying that, there are plenty of people out there who genuinely believe they can do that, and always know what you’re thinking. I call them the ‘mind scavengers’, but that’s a story for another day.

How many times have you said that to one of your children? ‘If you do that again I’ll kill you’. Of course, we don’t mean it, but I wonder if a child knows that? And you may well end up on the Social Services register, especially if your child repeatedly says it in school.

‘I’ll eat the face off you’, or ‘I’ll eat the head off you’. This just means you’re angry and not admitting to cannibalism. Make sure your eyeballs are bulging, and that your face is redder than a ripe tomato. It adds impetus to the words.

‘I’m so angry I could spit’. As rage forms into words of abuse you can’t help it. Spit is released from your gob like a fountain. It adds to that moment when you lose control and the person in front of you is showered with blessings – not! Bring back the spitoon, and be thankful for the Covid masks we are currently wearing.

THE IRISH SWEAR A LOT

Really? And here was I thinking we were a sophisticated lot. In Ireland, the F word is as frequent as the rain. More often the second letter is U rather than E. I’ m trying to be polite here. If someone says to you – ‘Feck off or fek off willya’,they’re usually joking. If you think they’re not joking – well that’s up to you. There’s a whole cohort of Irish insults I won’t bore you with. Google can do that for you.

If you’re posh you will no doubt say – ‘Oh dear! Oh my! Oh shucks. Golly gosh! You never! Not that I’ve heard these words back West.

It’s true that we end conversations with a repeated, repeated, repeated, ‘bye,bye.bye, bye, bye’. One ‘bye’ wouldn’t be enough. Even my South African husband has adopted that along with other Irish words such as ‘sound’, or ‘you’re sound’.

The cupboard is called a press. In the early days of our marriage my one and only was very confused. He thought I meant the iron when I said press.

As for the ‘yoke’ which is what we call everything in Ireland when its proper name evades us, he soon got the hang of that one. What’s amazing here in our lovely green isle is that everyone knows what the ‘yoke’ is.

‘In the press. Where else would it be?’

‘That yoke over there is annoying me. He’s a right maggot’.

Offer your pal a cup of tea and it will lead to a conversation like this.

‘I’ll have the tea, so. Whatever you’re having is grand.’

‘Well… do you want normal tea or…’

‘I don’t drink that herbal stuff. Can’t stand it. It tastes like s….. I don’t understand people who drink it. Sure we were all raised on the strong brew, not all that fancy stuff. And it didn’t do us any harm. People nowadays have notions about themselves – herbal this and herbal that.’

‘Do you want organic, full fat, low fat, or skimmed?’

And so the tea ritual plays out.

Mrs Doyle, the housekeeper in the TV comedy Father Ted, perfected ‘the offering of tea’, and it’s not as far removed from real Irish life as one could imagine.

If someone says to you – ‘How’s it going?’  Just reply: ‘I’m grand.’ But if you want to engage in a longer, more intelligent conversation follow it up with a spew of words even if no-one wants to hear you.

‘Sure everything is grand and if it’s not – it’s banjaxed! I’ve been up to 90 at work. Everything’s in bits, but I’ll give it a lash. No point in giving out about it. I’m working with a bunch of gobshites with not a bit of craic in them. Half of them are acting the maggot and yer man in charge is a right eejit. Let’s hit the town later and get hammered. Sure look, it could be worse, like.

JUST A BIT OF CRAIC 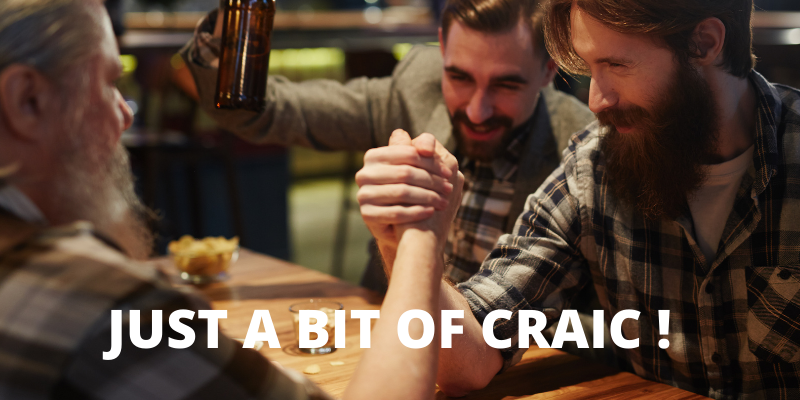 This blog is just a bit of craic. Absolutely no reflection on the suave and sophisticated people we are,  who can well hold our own end up in any situation, especially if it’s propped against a bar. (Not ballet barre unless that’s your thing.)

Scratch that. I mean we’re a savvy lot with a great sense of humour and quick off the mark when it comes to slagging, and having a bit of craic of fun. We don’t mind taking the urine (I’m being polite.) out of each other and the odd slap on the back with a raucous roar will confirm it’s just that. If the slap on the back flattens you, fire up your Inner Irish Ninja, or even better slag the slaggers with word ammunition. There’s a rake of Irish insults that scare the hell out of me. I’ve tried to pick the least insulting one.

‘Droch áird chúgat lá gaoithe. That you may be badly positioned on a windy day’. I’ll take the sting out of this by adding that your brother who’s walking behind you ate a s…. load of beans last night.

So on that final note I bid you adieu and:

“May you be in heaven a full half-hour before the devil knows you’re dead”.