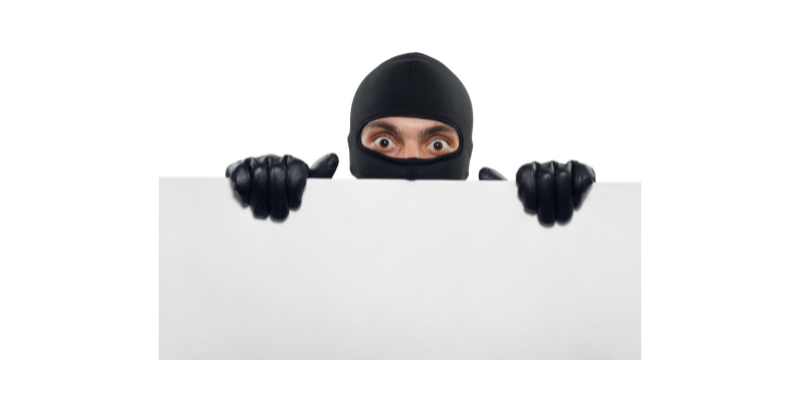 Going away on holiday sends me into a frenzy of cleaning and dusting and organising. Not that our home isn’t already all of those things, but I want to make sure any burglar who breaks in is comfortable and finds the coffee easily.

I want their first thought to be –

‘Ah, isn’t this grand! All the comforts of home. I won’t steal too much. They’ve given me a great welcome.’

So with a bit of luck I’ll attract a classier type of burglar.

Ten minutes later. ‘They don’t have much – poor sods. Maybe I should leave them a few bob.’ See it did work.

Don’t close the curtains on your windows when you go away. You may as well put a huge sign up saying – ‘We’re in Benidorm for ten days. Help yourself. The milk in the fridge is still fresh.’

I returned home from holiday one year to discover a letter in my suitcase. I was sorely disappointed to see it wasn’t a love letter.

It was a letter from customs to say my suitcase had been checked. They even washed and ironed all my clothes. Not!

Unfortunately, in some countries suitcases are rifled through at airports. Hence, the plastic wrapping service whereby you can seal your suitcase well against thieving. Practise safe packing. 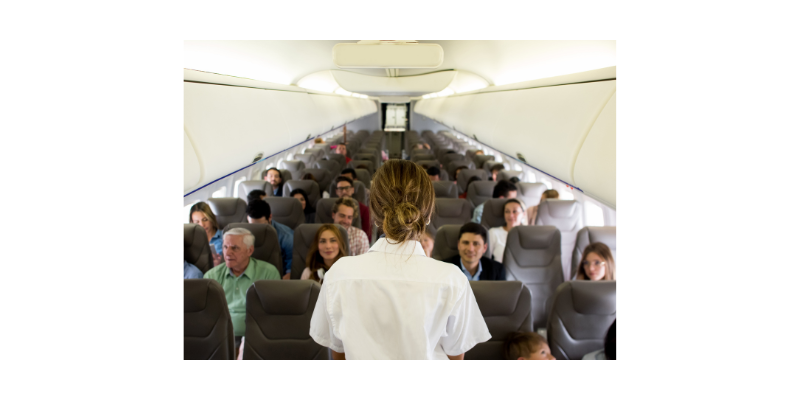 Does anyone watch the aircrew anymore as they perform their safety instructions? You know – what you should do if the plane crashes, or how to put on your safety jacket and whistle Galway Bay. Sure no-one seems bothered. All eyes are on their IPhones (no pun intended), or laptops, or mistress who they’re sneaking away for a weekend with. (Who said that?)

We’ve become so used to travelling and immune to any possibility of anything adverse happening.

I must admit I felt a bit concerned recently thinking the pilot’s voice sounded slurred. Apparently, he had a Southern accent – USA not Cork or Kerry.

A CREASE ABOVE THE REST

Icelandair only offers gluten free options to first class passengers. If you’ve booked an economy seat bring your own sandwich, or sing for your supper. I mustered up my inner Björk, hoping to impress the crew. They beat me to it and broke into a chorus of – ‘SHHH SHHH!’

Applying the law of averages, if they have one gluten free passenger among the forty odd in the first class section, there could be just two or three more in economy. For goodness sake, throw in a few extra gluten free bits, even a mini wrapped pack of cookies. Are we not worthy of service?

Seated directly behind the first class passengers, I was delighted to have so much leg room, not that my legs need it. That thought was squashed when I realized that it was more about distancing the scorned from the designer adorned. My Calvin Klein tracksuit didn’t quite make its mark.

“So out of season, darling.”

However, no-one could stop the rarified air from wafting my way. Definitely a bit more oxygen and I managed to reach over and grab some foie gras. I’m a veggie, so I plastered it on my face.

Having three seats to myself whilst himself availed of another three was heaven. I plonked my handbag in one and my ego on the other. Then I settled into my seat with a sigh of satisfaction. 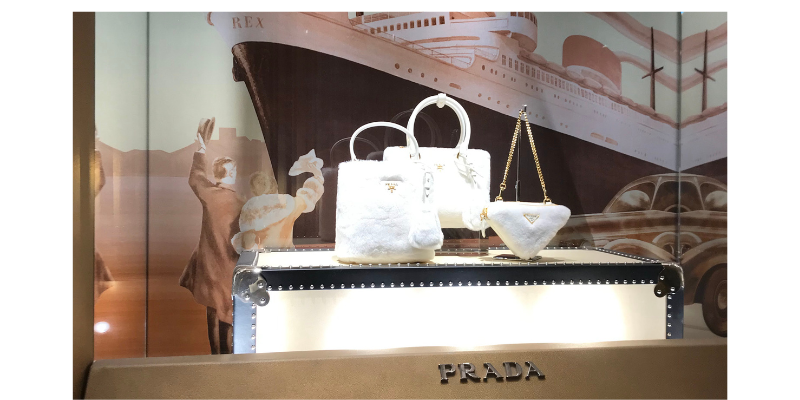 Cruising the aisles of the duty free shops is an experience not to be missed. The beauty section alone is filled with designer brands, some you’re familiar with and some you’ve never heard off.

Magical face creams and lotions and potions make promises to rejuvenate every cell in your body and remove any wrinkle. (Wonder if they work on my blouse. I forgot to iron it). How many of us fall for the claims of these awesome miracles? Egyptian Magic attracted me. If Cleopatra used it then it must be good. I applied. I waited. I applied more. I waited. I dollopped the whole container onto my face. I look just like a mummy. There you go.

If you want to smell luscious take advantage of the 200 euro plus perfumes and that’s for only a few measly mil. Come on lads, put a bit more in the bottle, not just a few squirts. I want to smell like a millionaire. And stop putting small bottles into huge boxes. You can’t fool me. I mean, that’s not fair on Auntie Minnie who decides to treat her daughter. Imagine how embarrassed she’ll be when her daughter discards the wrapping and discovers the tiny perfume bottle. Auntie Minnie will be mortified.

When one’s mouth spouts before the brain engages is not a good idea at airport customs control. Himself was asked to place four fingers on the pad. He held up his forefinger and said – ‘Do you mean this one?’ Not a glimmer of a smile wafted over the official’s face.

On being asked to remove my shoes, jacket and cardigan, I asked if I should remove everything. The response was – ‘We’re not that brave.’ Cheeky blighter. Ah well, another day, another dollar. 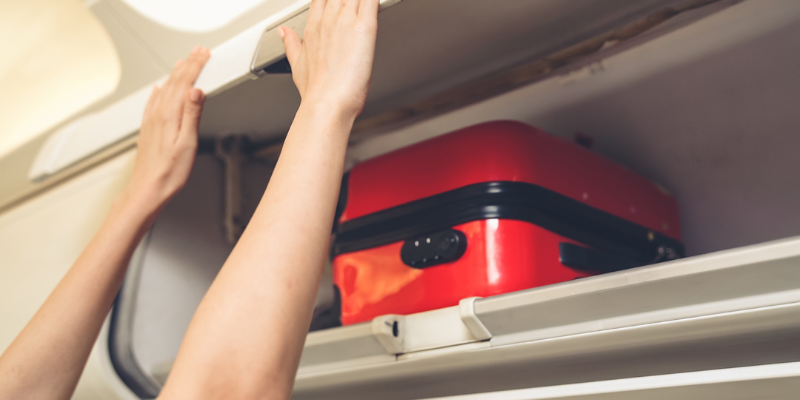 It’s amazing how many people jump up before the plane has come to a halt. Duck or be decked as bags are swung precariously over your head. Come on now. It’s not as if your luggage will be waiting for you. You’ll have to stand by the carousel like myself and get into a trance as you watch suitcases whirl around slooooowwwwly. They all look alike and you’re not the only one grabbing the wrong suitcase. Unless an Irish mammy had tied brightly coloured wool to the handle.

Of course, everyone heads for the nothing to declare exit. I decided to be honest. ‘I declare I …..’ I’ll leave it at that. It was a bit like going to confession in Ireland and I felt lighter in spirit. Well, they confiscated the ten bottles of brandy and rum I’d hidden in my luggage. So much for the spirit of Xmas. 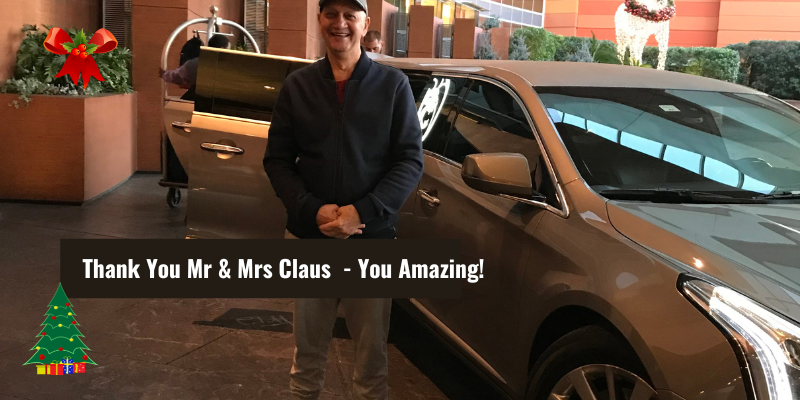 You know when you straggle out the final door from customs – a wee bit frazzled at this point. You long for a decent cup of tea and a hot shower. You’re still not quite “arrived”. It’s that interim between landing and uploading your mind and your body into some sort of normality.

Suddenly you see a smartly dressed person holding up a placard. It says – Abrahams. A wow moment that continues as he takes charge of your luggage and escorts you to a limousine! I swear I felt 6ft tall (quite a miracle for me) and I strode head high (regardless of the pain) like some celebrity. Great to have that ‘moment’.

He whisked to a fabulous hotel suite, it was another dream come true and a memory to treasure. Thank you Mr and Mrs Claus. You’re amazing!

Time to whirl and twirl my body cells in the jacuzzi – with a smile on my face. Later, I showed myself up in the fancy restaurant. When asked what I would like to drink, I stated, ‘a glass of milk. Preferably, from an Irish cow.’ They obliged. Fair play to them.

Read my blog – We all going on a Summer Holiday!