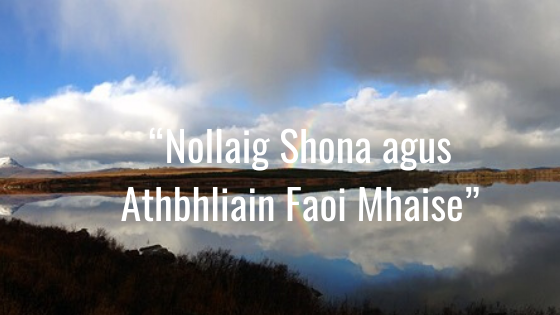 There are over one and fifty ways to say Happy Christmas. Make 2020 the year you learn them all. My favourites are the ones I have no hope of pronouncing, so my personal goal is to learn Cyrillic, Chinese, Arabic and Persian. Forget about playing charades. Just write out all the characters from these greetings and family and friends must guess what they mean. You can also write them in your Xmas cards. How cool is that!

My special gift to you this Christmas

Is not wrapped up in golf foil or glitter,

It is a treasure which you have given to me

Over and over again;

It is a treasure which is unparalleled,

It is the Gift of Love,

Which you have given me unstintingly;

I return it to you ten-fold and more. 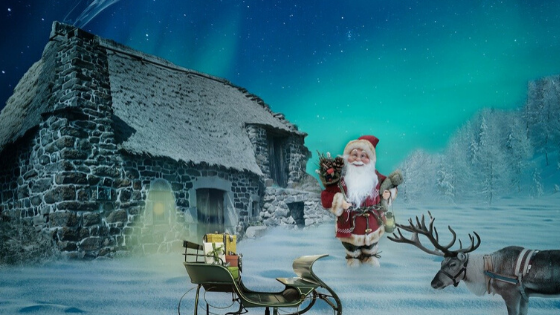 We are all familiar with the big, white bearded man dressed in a known as Santa Claus or just Santa. He has many aliases and a great many passports.

New legislation in Europe has really p… him off. Every year he must apply for a new licence to break into people’s homes. Unlike your usual thief in the night, so far that licence has been granted, but a time may come when he is refused.

Children worldwide will be traumatized. Rudolf the Reindeer will have a much bigger and redder nose from all the crying. Santa himself will be secretly relieved. He’s exhausted and although it’s only one night a year, zooming around the world in such a short space of time is no joke. Now he will chill out in the North Pole which will stop Mrs Santa’s nagging.

The minister for health in her bid to cut obesity (as well as the budget) holds Santa Claus up as an example. “This is not acceptable. We revere this creature and encourage our children to love him. He is fat! Only works one day a year, in fact less. Is cruel to animals making reindeers pull heavy loads and he does not know how to dress. And he breaks into people’s homes leaving a load of plastic trash which is destroying our planet. I say: Arrest this man and throw away the key.”

TRADITIONS IN OTHER COUNTRIES

In Austria we have the KRAMPUS. This is a beast of a creature, a demon, and it careers through the streets scaring the hell out of children and punishing the naughty ones. He is in fact St Nicholas’s henchman. St Nicholas, as we all know, rewards well-behaved boys and girls. Krampus apparently abducts the bold brats and throws them into his sack and away he goes, back to Krampus Land which is not a nice place. Understatement of the year. Also, during early December young men dressed like this scary beast go around clattering chains and really terrify the kids. They spend years in therapy.

Apparently, this is not Santa Claus which I find confusing. Nikolaus is a German fella who travels by donkey. Not a sleigh in sight. His preferred time is in the middle of the night, December 6th. If the children have been well behaved, he leaves treats such as toys, chocs and oranges. He leaves them in their shoes so let’s hope they are not whiffy ones. He visits schools and each child who recites a poem, sings, or produces artwork, being rewarded with a gift. That was the nice part. Nikolaus brings along reinforcements in the form of Knecht Ruprecht, Farmhand Rupert. He’s a devil-like character with a dirty beard. He’s dressed in dark clothes with the addition of lots of bells. He carries a stick or a whip to punish the bold children. Yada! Yada! Yada!

Thirteen days prior to Xmas the Yule Lads dress up as thirteen troll-like creatures. They are full of tricks and go out to play. During the thirteen nights prior to Xmas they visit children who must place their best shoes by the window. One of the Yule lads’ visits with lovely gifts for the perfect children and the naughty receive rotting potatoes. They have weird names such as Sheep Cote Clod, Gully Gawk, Stubby, Spoon-Licker, Pot-scraper, Bowl-Licker, Door-Slammer, Skyr-Gobbler, Sausage-Swiper, Window-Peeper, Doorway-Sniffer, Meat-Hook and Candle-Stealer. They are a mischievous bunch so watch out and bear in mind that their names are indicators of the kind of mischief they get up to.

THE LIT CANDLE IN THE WINDOW

Placing a lighted candle in the window of a house on Christmas Eve is still in vogue. It’s put there to welcome people in need of shelter. It’s also called The Wanderers Candle. Its mainpurpose is to welcome Mary and Joseph.

People all over Ireland brave the freezing cold Atlantic Ocean and they go swimming Great therapy. This is often done in aid of charity. They charge into the water and scream, choking on expletives that almost escaped as children are also taking part, and it is Xmas Day.

Personally, I’m not hiding mine as I need it. This Xmas Eve tradition of hiding your brooms is in Norway. Apparently, it’s an old custom going back centuries to a time when people believed that witches and evil spirits searched for brooms to ride on. Possibly not so popular now due to Uber Broom. However, some people still hide their brooms in safe places, just in case and then they spend the rest of the year looking for them. I’d keep a close eye on your neighbour if I were you. He’s selling lots of brooms on Amazon.com.

A MESSAGE TO ALL MY FAMILY OVERSEAS

This Christmas I can’t be with you,

But be assured you are forever in my thoughts

And deeply entwined in my heart;

No matter how many miles separate us,

My arms reach out to embrace you,

And I hold dear all that you have given me,

I send you all my love

And hold you close to my heart.