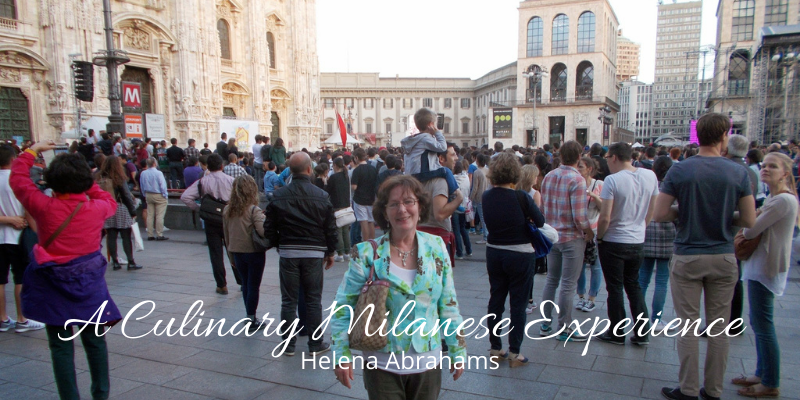 Here I am in Milan again – I love the City so much !

This blog is a natural progression from last week’s blog –Weighing up the Odds. What else do you discuss or write about when you want to lose a few ‘odds’. That does not include Richard’s odds.

A few years ago, our daughter treated us to a Valentine’s Day lunch at the Four Seasons Hotel, in Milan. What a delightful experience. Just walking down the grand stairway was amazing. I felt like a Queen Bee without its sting. The sting had to be left in the cloakroom, along with my diamante dazzlers. Well, you never know in these places. Someone might be tempted to steal my children’s inheritance.

It was the start of a unique day. There were two ladies in front of me wearing real fur coats. How do I know they were real? A mink’s open mouth frozen in terror and the pleading eyes of a chinchilla were small clues.

It was too late to rescue them. Not having a tin of red paint in my capacious handbag, which was unusual, I rummaged in its grungy depths and found red nail varnish. Come on, I had to do my bit for the animal rights movement. However, hunger was stronger than courage and I didn’t want to be evicted before I partook of lunch.

With a haughty look I handed over my La Penne designer coat. You all have one of those, don’t you? The La Penne coat not the haughty look. (Whisper. Penneys.) The haughty look was purchased at La-Di-Da in Oughterard, and the rest of my outfit at Hey-Diddle-Diddle. I also handed in my fiddle. Bit of street busking to do after lunch.

HOW TO NAPKIN-FLICK SOMEONE’S EYEBALL 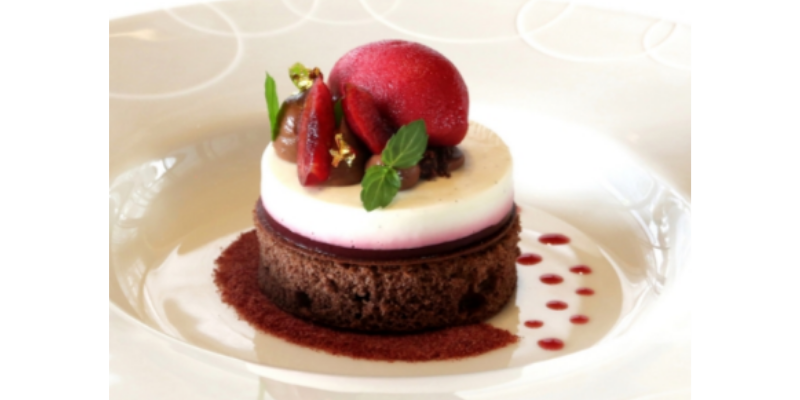 We were shown to a small table at the back-end of the room. Clearly my air of hauteur did not impress the Maître Di. He swept my chair back with great aplomb. How do they do that? Does catering school have lessons on chair moves, napkin whisking and slightly lowered eyes?

Although, this fella eye-balled me with a ‘behave yourself pleb. We know your sort. Just in case I didn’t get the message, he whispered in my ear. ‘Signora, work from the outside with the cutlery.’ I was tempted to wipe the smug look off his face and pretend it was an Irish greeting, but I resisted. Anyway, without more ado (enough ado done already), Richard and I were seated.

The whiter than white napkin was flourished and whisked, almost getting airborne (causing diners nearby to duck) and placed on our laps. It was huge. More like a table-cloth than a napkin. Capacious enough to hide a few choice bits of leftovers for takeaway purposes.

A FEAST FOR THE EYES 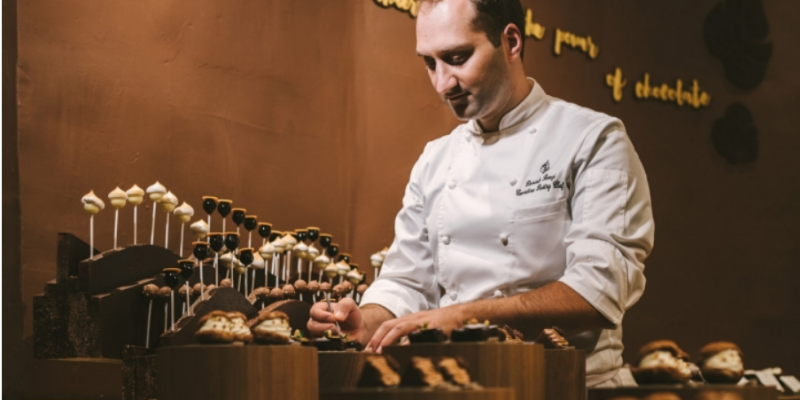 This was a posh buffet lunch. Not the kind where you help yourself but one where chefs stood to attention behind a glorious array of food. And certainly not that strange buffet queuing system where a few people think the queue is not for ‘them’ as they knock plates into your elbows, shove and push and claw at the food. No, this was definitely the posher version. No rush. No push. Plenty of gush!

Different sections were devoted to specific foods with a chef proudly waiting to serve you and explain the ‘how ze fooda was cooked. (Apologies to my Italian pals who speak perfect English). This was an epicurean delight. See Food and Eat it. Pasta Your Time. Stake through the Heart (a very dead cow). Fresh Insalata. (You know its fresh when the caterpillar eyeballs you). Formaggio, or cheese to you an I.

The kind of cheeses that are 100 years old and pong like a bloated person on a windy day. And the piece de resistance, or pezza di resistenza, (said with an upward flourish of the final letter), was the ‘lick your plate and roll your eyes’ patisserie.

DROOL AT YOUR PERIL 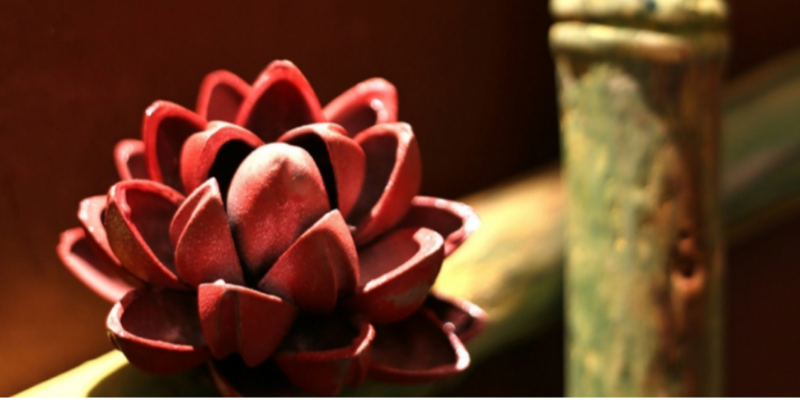 I got into a conversation with the Patisserie chef, as you do. Picking his brains about how he made these delectable bits of passion. His Affogato was hot and espresso driven. His Bruttiboni oozed admirably.

WHO STOLE MY CUTLERY?

My heart was still going ‘boom boom boom’ when I sat down, a sensory over-load side-effect. Richard and I ploughed through our starter, well a few bites and it was gone. A minimalist arty-farty dish that was more for the eyes than a hungry stomach. Told you it wasn’t a normal buffet. When you can’t help yourself, ze chef vants to train your palate.

We arose (remember this is the Four Season) and perambulated to choose our main course. We were feeling a bit more comfortable and did a grab and run. We arrived back at our table to find it was reset with fresh cutlery and glassware and my crumpled napkin had disappeared.

Yada! The Maître D came over and asked if all was well. I actually thought he had assumed we were finished eating and reset the table for someone else. But apparently not. Move at your peril. I suppose the ‘well paid’ dishwasher in the kitchen isn’t busy enough. 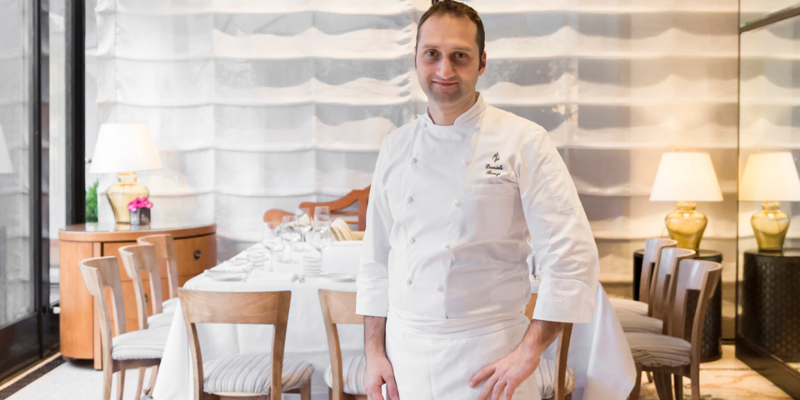 Richard and I had sipped and supped our water when a ‘plastered on smile’ loomed nearby asking what kind of water we wished to partake of. I said ‘fizzy’ which made him frown. Richard whispered – ‘Don’t order any more. It’s ten euro for a small bottle. Sod that for a lark. I decided to test the waitron’s knowledge.

‘Young man, do you have Mumbai un-distilled?’ He frowned. ‘Or the flavoursome Mitchells Plain aqua vita?’ He bowed. What a gentleman. ‘I will check, Signora,’ and off he went. Meanwhile, my attention was attracted by the two young waitresses standing nearby. They were having a great gossip.

Fair play to them. Suddenly the Maître D descended, his hands flapping like the broken wings of a duck. I’ve never seen two people move so fast, causing a gust of wind that blew the napkin off my lap. No worries. It was replaced by a clean one before my ‘Ooh’ was verbalised. Our waitron re-appeared proudly holding a bottle of water. ‘Signora, your Mitchells Plain Aqua Vita. Flown in from Cape Town this morning. It is a vintage bottle. Enjoy!’ That took the wind out of my sails.

He opened the bottle with a flourish that created a collective ‘Aah! Bella!’ from all the diners. He poured a little into Richard’s glass who obligingly sipped, salivated, and spat. ‘Lekker! Dis goed so.’ A sip of Mitchells Plain aqua vita activates your mother tongue. 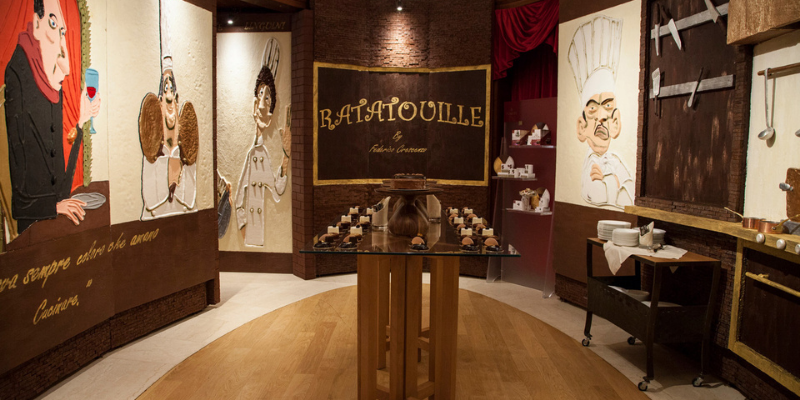 I was so speechless the O in my Wow withered. I have died and gone to chocolate heaven. The smell – that sounds nasty. The aromatic-sensory-scented-fragrance-filled air made me swoon. Unfortunately, there was no gorgeous young patisserie chef nearby to rescue me.

Instead, this room was guarded by a 6ft Amazonian female. The management at the Four Seasons are no fools. They know us drooling females will run amok in a chocolate room. This lovely statuesque lady placed a few minute samples of chocolate on my equally minute plate and I wandered sadly back to my table.

New cutlery. New napkin and not a crumb in sight, or the prawn I had dropped on the floor. Chocolate was eaten in less than a minute. I’m a fast eater. I just inhaled it. I wanted to go back for more but I was too embarrassed.

Richard and I seemed to be the only people traipsing up and down re-filling our plates. You could tell the other diners were the discreet moneyed kind. You could smell it. And the presence of nanny’s with their children was a dead giveaway. Pizza and chips were ordered for some of the kids. Who does that at the Four Seasons?

This blog is fictitious. Almost. The Four Seasons in Milano is ‘perfetto’. The staff are discreet and efficient and would never dream of telling your husband that you were there a week ago eye-balling the patisserie chef. I will be back! That’s a threat. Have a week of culinary delight.